"Aeon Worm" is the first episode of the second season of Bravest Warriors, and the 12th episode overall.

Cartoon Hangover presents Bravest Warriors, "Aeon Worm" Beth goes behind the door into the See-Through Zone to discover the mystery behind the secret message, "Ralph Waldo Pickle Chips is the key" Everything gets epic in the Season 2 premiere of Bravest Warriors!

The episode begins where the Season One finale, "Catbug," left off. With the Paralyzed Horse narrating, we see Beth wake up, grab a levitation device and a saddle for the Horse, and go through the door that leads to the See-Through Zone. Her all-knowing Horse follows her, continuing to narrate in his mind. Beth notices that she can hear the Horse's thoughts which he says must be due to a "brainwave conductive material" in the See-Through Zone. The Horse tells Beth that they must leave the See-Through Zone because he cannot protect her there, but Beth wants to rescue her father who is trapped in this Dimension.

They find a large hole that's marked with a sign that says "Pickle Chips" and an arrow pointing downward. Beth says she must jump in alone, but her Horse insists that she mount him and they fall down the hole, through a large open mouth. Beth's father appears, calling for "Monty," which wakes Beth. He welcomes her and the Horse and introduces himself as Reverend Pickle Chips. When Beth tries to correct him he ignores her and instead says, "Step Two". Pickle Chips turns on some furniture holograms, and when Beth worries that her father thinks he's Ralph Waldo Pickle Chips the Horse replies that Beth's dad must have been changed by the dimension. Beth's dad tells them that "Ralph Waldo Pickle Chips" was the name chosen for him by the Worm. Throughout the episode he and other citizens of the See-Through Zone repeat the phrase, "Never doubt the Worm."

As Pickle Chips makes some food for them (which Beth realizes is the same purple virus from the last episode) Beth tells him that she's there to rescue him from the See-Through Zone. He insists that there's no way out and that he sent the door to bring her to stay there with him. He goes on to "Step Three," handing Beth a pamphlet explaining the cult of the Worm. Beth notes that the panphlet includes some testimonal from President Fishhead. Pickle Chips clams that the Worm operates at a level of intelligence more advanced than most people can imagine, and states that the cost of the Worm's guidance is "a virgin and a horse" to which Beth exclaims, "that's us!" Pickle Chips notes that it could be a "virgin horse" as there was no comma between "virgin" and "horse."

The Horse realizes that they are in the belly of the Aeon Worm and tells Beth that the See-Through Zone is a prison that holds every creature Pickle Chips ever defeated while he was leader of the Courageous Battlers. One of the denizens expresses dismay that Pickle Chips fought the Worm, but he dismisses it by saying it was before their time and to "never doubt the Worm." Suddenly, while explaining his catatonic state to some of the other inhabitents of the Zone, the Horse realizes that he can move his limbs through telekinisis and celebrates by dancing around.

Beth again tells Pickle Chips that they should leave, but the Aeon Worm reacts angrily which in turn causes Beth's dad to get mad. He says the door through which they entered the See-Through Zone is designed to vanish after opening, which causes both Beth and the Horse to panic. The Horse begins kicking the Worm's brain stem with little effect. Pickle Chips says he will make up the guest beds, and Beth tells him that she dosen't want to lose him but she can't live inside the Worm. Pickle Chips scolds Beth to stop being selfish, saying that she must accept her fate and live here with him, submitting to his orders. Beth responds by punching Pickle Chips and knocking him out. Then she picks him up and escapes along with her Horse through a small portal that takes them back to the entrance with the door.

The Worm bursts out of the hole in pursuit, trying to prevent them from escaping the Zone. The Horse uses his new-found telekinetic powers to form armor, a crown, hair, and a beard and begins shooting the Worm with bolts of energy from his hooves to protect them. Suddenly Catbug teleports in by their side, exclaiming, "Why are we running?!" They reach the door and the Horse continues to fight the Worm. Beth pleads with her Horse to come with her but he insists that he must stay and defeat the Worm in the See-Through Zone, for it is his "destiny." The bridge begins to collapse, causing Beth and her father to fall, but Catbug flies down and picks her up, carrying her through the door and back in to the Warriors' hideout. As Beth, her father and Catbug are escaping, Danny wakes up to see the door closing on the See-Through Zone where the Horse continues to fight the Worm. After the door closes it folds in on itself and vanishes right before their eyes. 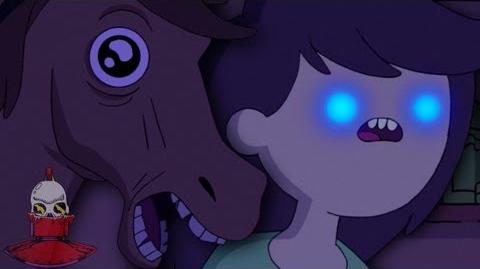 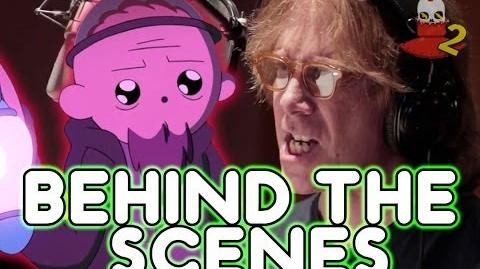 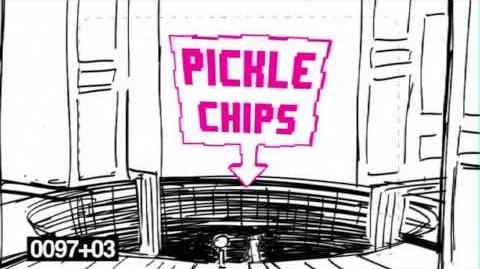 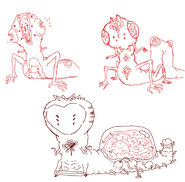