Bethany ‘Beth’ Tezuka is one of the main characters of the series Bravest Warriors. She is the daughter of Johnny Tezuka, the only official female member of the team and the crush of Chris Kirkman.

She is voiced by Liliana Mumy.

Beth is a light-skinned warm-toned young woman with waist-length black hair that has bangs swept on either side (depending on which way she turns).

She wears a white short-sleeved coat with a green and gray jumpsuit, a green belt with a peach-colored sticker on it, knee-high light gray socks, black high-ankle boots and gray sports armbands on her elbows.

She wears a green swimsuit that looks like a bikini and a towel that wraps covers her swimsuit in "Gas-Powered Stick".

Even as a born warrior at heart, Beth sports a cute, energetic and fun-loving demeanor who was too hesitant to admit her feelings for Chris Kirkman. This was likely because through the years (before the Aeon Worm was imprisoned at the See-Through Zone) the Aeon Worm had been eating all of her feelings. Beth is liked by the rest of her team and has even earned the unrequited affection of Chris (which she is seemingly aware of but never mentions). Later on, she admitted her feelings towards him. She calls Chris her "soulmate" and told him that she loves him. She also became angry and expressed doubt and jealousy when she discovered that Chris and Plum have been spending time together in "Season of the Worm", mostly because she loves Chris. Beth always cares about people, and relates to people, and she has a fiery natured heart.

Although she is good-natured, she is tough and completely capable of handling herself, and Beth also may be vengeful, and by 'killing' her father Johnny Tezuka. She is very artistic and apparently doesn't believe in the ideals of fate nor romance. In "Aeon Worm" she also demonstrated a certain level of submissiveness to Johnny Tezuka (Beth's father), calling him "sir" after he speaks to her, suggesting she was raised in a strict household. Nonetheless, she realized he was not sane and didn't let this stop her from punching him in the face.

She and Chris would even ride on her Paralyzed Horse, which was struck by the knowledge of the Space-Time Calliope. Johnny Tezuka (Beth's father) was the leader of the Courageous Battlers before they were lost in the See-Through Zone and he was eaten by the Aeon Worm until her teenage years. In the meantime, she joined with her friends and together they became the Bravest Warriors.

Chris and Beth are best friends and they grew up together. Although Chris has an obvious crush on her, she seems to disregard this fact and acts oblivious to Chris' feelings. Despite this, Beth is very possessive of Chris.

In the original animated short, Beth was seemingly unaware of Chris's love for her and could not hear him when he finally confessed his feelings.

Beth and Chris kiss in the episode "Memory Donk" when they both lost their memories, but when Beth regains her memories (while she is kissing Chris) she retaliates by saying they're just friends and playfully punches his chest.

In "Bravest Warriors Comic #20" Beth finally acknowledges her feelings for Chris. When the tractor beam pulls the Bravest Warriors, Beth convinced Chris to come with them and told Chris that she loved him, but when they finally get out of that, Chris didn't remember what happened, or he just forgot the confession as if nothing happened. Beth didn't seem to care about if he listened, so maybe it was just an impulse.

In the episode "Hamster Priest", when Beth comes back to her dimension, she stammers whilst trying to say that Chris and Plum were frenching, possibly being jealous of Plum. Also, she looks up into Chris's eyes lovingly when he picks her up.

Also when she finds out in "Season of the Worm" that Chris had been spending time with Plum she sounded upset or sad.

Plum and Beth are close friends who enjoy hanging out.

Danny and Beth had a previous relationship in the pilot, but this has been removed from the series.

Danny and Beth are good friends, and Danny acknowledges Chris' crush on Beth. While he does tease him about it, Danny almost always supports it.

Danny and Beth sometimes fight like cats and dogs, funny because of their signature animals being a cat (Beth) and a dog (Danny).

Danny and Beth have a playful friendship and often tease each other (usually through insults).

In "The Bunless", when Danny had to dance with Beth, at first she seemed unsure, but then she seemed to be enjoying dancing with Danny, and vice-versa.

In "Cereal Master" Danny calls Beth a "fresh little chuck-wagon" as a term of endearment for Beth and mentions her "cinnamon girl air." Though it should be noted that he was saying this to motivate Chris to start a relationship with her.

In "Season of the Worm", while the Warriors follow Mitch on the Falcon Suit, Danny made a flirty comment to Beth. Quoting "Put away those lady tears darlin', I'll take care of you." However, Beth showed no interest and shut him off immediately, which seems to hurt his feelings.

Later on, during the six months of Chris' disappearance, it is informed that Beth and Danny grow closer, and their relationship becomes somewhat romantic, but they do not become an official couple.

Beth's horse somehow acquired the ability to become fully sentient and highly intelligent after acquiring knowledge of the Space-Time Calliope. Beth seems to have a great deal of love and care towards him. He apparently sacrificed himself to save her from the Aeon Worm.

Beth has had her horse since she was six (a total of ten years so far). It seems that her horse has been neglected by Beth because she doesn't ride with him much anymore. Her horse still cares for her and has knowledge of the future and past, as he has discovered the Meaning of Life, and understands the principles of Forever.

From his log of July 3, 3085, he says that although having supreme knowledge of forever he still stands by Beth and cares for her and is bothered by the fact that when Beth is in pain, he cannot help.

To see more, go to Beth/Gallery 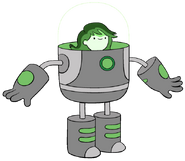 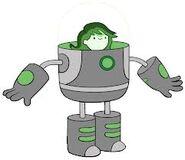 Beth as a Princess 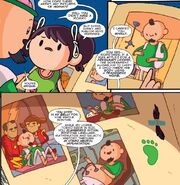