Bravest Warriors is an animated series created by Pendleton Ward and produced by Frederator Studios for their Cartoon Hangover YouTube channel. The series is about four teenage heroes-for-hire: Chris, Beth, Danny and Wallow.

It premiered in November 8, 2012, before the release of the Bravest Warriors comic.[1] Unlike other cartoons, Bravest Warriors will be exclusively available on Cartoon Hangover's YouTube channel.[2] This means that the series will not be shown on television like most media.

According to Bravest Warriors' Tumblr, all new episodes air on VRV in the United States; with Seasons 1 and 2 episodes are viewable on YouTube. Since Season 3, International Distribution is handled by Nelvana, a Canadian animation studio and media company. 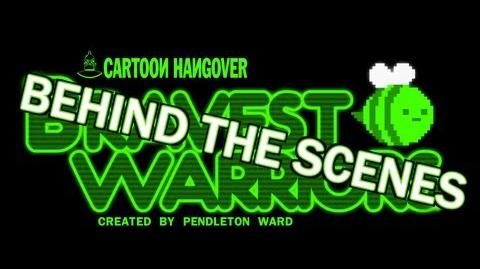 The original logo for the series.

The second logos. It's currently been used for Production purposes instead.

A promotional postcard by Pendleton Ward.