Catbug acts like a 10 year old though in the comics it is implied that he is, in fact, several decades old, and has a very sweet and childlike personality.

Catbug's personality also makes him seem simpler and more carefree, like in the episode "Gas-Powered Stick," where he was seen talking to a spider, and in the episode "Catbug" when Danny yelled to drop the sugar peas, and he cheerfully did so. This simple attitude is also shown when he suggests throwing a blanket over the tainted gifts to stop them from growing in the same episode. Like most children, he is very kind and eager to make friends and interact with people, but can still fail to grasp the consequences of his actions as seen by his beheading of Jelly Kid, though this may be in part due to his nature as an animal.

On that subject, Catbug has shown to have a darker side, proven by the fact that he murdered Jelly Kid for no foreseeable reason and then showed no remorse. Beth described such a thing as part of his badass animal instincts. In the Catbug mini-episode he is shown to keep a dead rat as a plaything in much the same way a cat would play with its prey.  During the episode "Hamster Priest" an alternate Catbug is shown to be the tyrannical despot of another dimension.

Catbug is a mixture of a blue cat and a ladybug. He has a head of a cat, white eyes and no nose. He has a round, chubby body with small legs and no tail. He has red elytra (wing-covers) with six black spots like a ladybug and four translucent wings.

Catbug is thought to be Impossibear's companion, though Impossibear is sometimes mean to Catbug, as when he smacked him with the Gas-powered stick. Impossibear's often bullies Catbug in a manner similar to that of a jerky older brother. In Jelly Kid Forever Impossibear is impressed when Catbug kills Jelly Kid, saying, "Catbug, you a cold-blooded dickens!" In Catbug's Away Team he was shown to be jealous of Catbug's leadership and tried to disrupt his authority. Despite his tendency to bully Catbug he often drags him along with whatever plan he has cooked up and seems to enjoy spending time with him the most out of all the other pets (with the exception of Space Chicken). Catbug likewise seems to enjoy Impossibears company and never resents him for his questionable treatment but is not above telling on him when he steps out of line.

Although officially dubbed a pet, there are times in which Catbug is treated more like a little sibling or a cute kid that everyone takes care of. Due to his childlike mannerisms the Warriors do not hold Catbug in high regard and don't usually trust him with assignments. Given the event of "Catbug's Away Team" it is not hard to see why. In the comics he is often forced to take bigger parts in the missions sproviding whatever aid he can with various degrees of success.

Of all the Warriors Catbug seems to be the closest to Plum trusting her above the others on his secret past.

Catbug doesn't seem to get on with his brother and is possibly in hiding from him, as can be seen in issue #25 of the comic book series

The full gallery for Catbug can be viewed at Catbug/Gallery 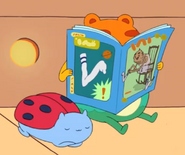 "Ahh!!! Impossibear has a gas-powered stick!!!" 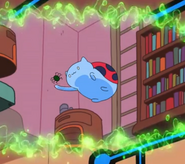 "My name is Catbug! What's yours?"

"He says he wants more carrots and bread crumbs!"

"Catbug, come on I asked you not to feed Wankershim."

"You're my friends now."

"Hi Wankershim! Are you going to go doodie?!"

"Your mom said to say I could have just one peanut butter square but not til after they cool down."

"Yeah! Everything is okay!"

"Yeah. But I don't know how to make myself go there."

"Maybe it may never happen again."

"Throw a blanket over it!"

"Put a little fence around it!"

"Why would you do that?" 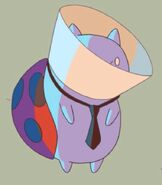 Was referenced by Burnie Burns in a Rooster Teeth Animated Adventure and Podcast.

Community content is available under CC-BY-SA unless otherwise noted.