"Catbug" is the 11th episode of season one and the first season finale of Bravest Warriors .

When the Bravest Warriors receive mysterious gifts from the See-Through Zone, they must use their wits to unlock the door to the greatest secret. In this season finale, there promises to be more emotion, Catbug, and delicious peanut butter squares than ever before!

The episode starts with Chris and Beth sitting in Chris's room talking about the boundaries of the universe. Beth says that the universe goes on forever, and there are millions of alien species, but their minds weren't designed to comprehend the concept of forever. Chris, sitting on the windowsill, points out that Beth's horse found out what the universe meant by the time they were 6 [ten years go]. Beth says she should ride him more, but he always seems so blown away. Danny walks in and informs them that they have received presents from their parents.

The warriors have always known that Catbug lives in two separate dimensions and is able to jump back and forth between both realities, but until now they haven't known that the place to which Catbug jumps is the See-Through Zone. The Courageous Battlers have been trapped in the See-Through Zone for two years and have sent Catbug back with presents. Danny starts handing out the presents: Wallow's father sent back his Pony Lords Battle Aquarium. Chris's parents sent back his baby pictures, Will Rogers commemorative stamps, and a sinus irrigator. Danny got an expired lottery ticket and a knife.

When Catbug jumps again to the See-Through Zone, Beth picks up a note from the ground, which reads, "Chris, we are alive. Love, Mom and Dad." Catbug jump back to peanut butter squares for Wallow from his mom. According to Catbug everything is okay in the See-Through Zone, but he has not seen Beth's father and that she didn't get any presents. Chris tells Catbug to ask their parents if they need anything, but Catbug says he doesn't know how to make himself go there and that it may never happen again. Then he jumps dimensions again.

Just as Wallow is about to eat his peanut butter squares, Beth scans them and sees they are infested with an unknown microorganism. The scan reveals that all the gifts are covered in the substance, a virus from outside the Space-Time Calliope. Catbug reappears bearing sugar peas, which Danny tells him to drop. Beth discovers that she cannot kill or even affect the virus because the laws of Space-Time don't apply to it.

The presents form together, rising and turning into a purple frog-like monster. Catbug jumps again to the See-Through Zone, then the door roars, hardens into wood and its wide mouth turns into a door. Catbug returns with another note that reads "Ralph Waldo Pickle Chips is the key." Danny is determined to open the door to see his parents again and will not rest until the door is open. Ten hours later, Danny gives up for the day and goes to bed. Chris is relieved that they at least know that their parents are still alive, but then remembers that the whereabouts of Beth's father are still unknown and apologizes to Beth. Saddened, Beth says she hasn't given up yet and visits her horse.

In the next scene, Beth is sleeping near her horse as the horse records his day in his mind: "Paralyzed Horse's Log: July 3, 3085. Every day I hear and see eternity. I am frozen in awe of my knowledge of 'Forever'. But I belong only to one girl. Nowhere can I see more clearly then into her heart. When Beth feels heartbreak, I am stranded in the Stygian void, helpless to comfort her, for I am just a horse... Sleep now Bravest Warriors and dream of doors and keys and Ralph Waldo Pickle Chips. Today, something unnatural has slipped into your universe. An octave of death. A tentacle of time. It is the final gift... and it is not for you. Beth does not know it now, but this gift...is for her." 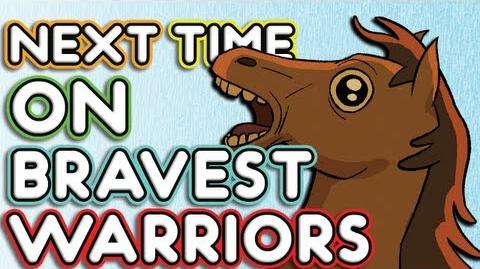 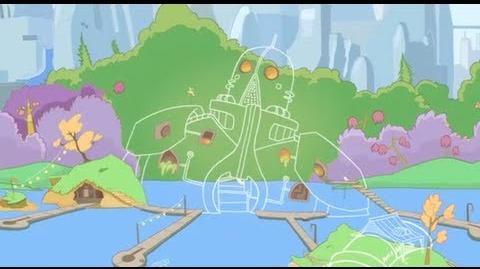 "But science tells us the universe goes forever."

"We all know it's been proven, but we still can't comprehend it."

"Our brains just weren't designed to understand the concept of "Forever".

A picture of young Beth and Chris on Horse

Hiding in her shirt

"I see someone painted her pigs."

Presents from our parents

"They've been sending Catbug back with presents?"

"I haven't seen this in a hella-fortnight!"

"Your mom said to say I could have just one peanut butter square but not til after they cool down."

"It's a virus. All the gifts are covered in it!"

"Throw a blanket over it!"

"Put a little fence around it!"

"I don't care what I have to do, or how long it takes me. I will not rest until I've opened that door."

Danny sleeping with a Chainsaw