}The Courageous Battlers is the group formed by the Bravest Warriors's parents. Two years before the start of the series, the Courageous Battlers became trapped inside the See Through Zone and haven't been seen since. Currently, they're alive and have been using Catbug as a delivery boy to deliver presents to the Bravest Warriors, however, Beth's dad has escaped the see-through zone in the episode "Aeon Worm". Although their current status is unknown, it is entirely possible that Johnny Tezuka (Ralph Waldo Picklechips) killed the rest of them and ate them, either out of hunger or under the orders of the Aeon Worm. It is also possible that the rest were killed by the monsters of the See-Through Zone or the Aeon Worm itself or even became its followers like Beth's dad. 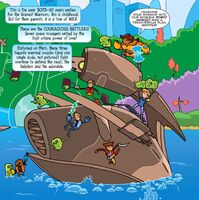 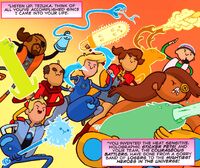