Daniel "Danny" Vasquez is one of the main characters in the web series Bravest Warriors and is one of the four members of the team. He is a vain yet insecure inventor, with a moody and rebellious edge. He is voiced by John Omohundro.

When Danny was younger, he and his parents lived in the Martian Badlands, A.K.A. New Miami. There, he was constantly teased because his nipples showed through his shirt and all he ever wore were hooded skin-tight unitards. Danny yearned to be a member of the Low Gravity Hacker Pack, a group of kids who hacked for fun. The leader, Hans Christian Teet-Phanters hacked his father's garage door opener and reprogrammed it so that whenever the button was pressed it would cause Danny to vomit. Afterwards, the hackers made use of this on several occasions; such as when Danny was performing his flute recital for the President, during his first spiritual experience, and the day when his grandmother got out of prison. During Danny's first science fair, the Low Gravity Hacker Pack destroyed his science project and made him puke all over its remains. (Dan Before Time)

Danny skates the line between supreme honking egotism and a cosmic gulf of self-hatred. He's a confident rebel, taking great prime in being part of the Bravest Warriors team - even going as far as calling his team "the mightiest heroes in the universe", but when he's down he always seems to get kicked.

As a moody tech-headed inventor, Danny thinks he's only looking out for himself, but in fact, he's here for a purpose to serve the greater good. Life has been a rough road for Danny, but when his team really needs him he busts out with the pepper and rushes to the rescue.

Danny is easily offended, as shown in the episode Time Slime, where he gave Supreme Chancellor Gayle the finger, after being told he looked like a dork. He also reveals afterwards that he is taking moop managing classes for this exact reason.

In the comics, he has a deathly fear of clowns and even built a helmet that made all clowns seen through his visor appear to be Plum; demonstrating his desire to use technology to solve problems, instead of dealing with them on a personal level.

Danny has brown hair, thick brown eyebrows, and a light brown complexion. It is heavily implied that he is of Mexican descent. When not in his signature red armor, Danny wears a red hoodie with a red jacket over it and blue-grey pants. He also wears large crimson and yellow boots that are part of his armor.

In "Gas-Powered Stick," he wears a red swim trunks with a red towel on his shoulders.

In "Hamster Priest", several alternate versions of him appear, with transplanted goat-eyes, then as the commander of a Star Trek-esque warship, then with a mustache and a buttoned shirt with floral patterns.

Danny and Chris have a very deep connection. He knows and acknowledges Chris' crush on Beth, and often enjoys teasing Chris about it, but overall approves and is supportive of it. Chris always advises Danny to express "moop" in more positive and productive ways.

Chris is one of Danny's best friends since as shown in RoboChris they regularly complete crossword puzzles together and planned on growing a "Friendship Garden" when they were children. Not to mention in that same episode, Danny created a robot version of Chris purely to make him jealous as revenge for forgetting Danny's birthday. It is also said in both the web cartoon and the comics that Chris made Danny "want to be a better man".

Many of the alien pets living with the Bravest Warriors (mainly Impossibear) have noticed Danny's attachment to Chris, referring to it as a "secret fixation" and saying that Danny dislikes talking about it ("Everything is Okay").

As of issue #18 of the comics series, it is shown that Danny feels much more attached to Chris. While fighting an unknown enemy, the team is shot down in their ship, and they crash on an island. Chris goes into the wilderness alone. After it becomes apparent that they won't be leaving anytime soon, Danny goes looking for him soon after, displaying high levels of emotion for wanting Chris to be back with them.

In "Whispers in the Morning", Danny and Plum fight over which one of them gets to kiss Chris.

Danny and Beth are close and have a playful flirty friendship.

In the original pilot, Danny was once Beth's boyfriend. This character tie has been completely removed from the new series.

In the series, there is a possibility that they will one day get married, but it is unclear since that relationship would only happen if Chris follows the path of the Zarpap. During Chris's six-month absence, Danny and Beth get closer on a romantic level, and are said to have shared "a juicy tongue kiss".

In late season four, they had a secret romantic relationship.

Danny considers Wallow one of his best friends, as stated by Danny in Season of the Mitch, and they get along very well. Danny programmed Pixel, the AI program in Wallows glove. Danny also blames himself for getting Wallow's arm chopped off in Season of the Worm , leading to a sharp spike of depression and self-doubt for Danny in the following episode.

Danny initially had a crush on Plum and was shown to compete with Wallow for her attention. While she is aware of his affection (in his constant attempts to try to impress her) and is flattered by it, she only shows affection toward Chris. Danny says he liked her because of her "flowy purple hair, her rad boobs, and her sweet little clappy pig-hands".

Hans Christian Teet-Phanters was Danny's childhood bully, who would torment Danny in the Martian Badlands. Hans mainly bullied Danny with a garage door opener he had programmed to make Danny throw up whenever pressed, as shown in Dan Before Time.

The full gallery for Danny can be viewed at Danny/Gallery 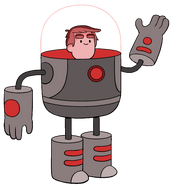 Danny in his space suit

Censored Image in the USA