Emotion Lord (actually the older version of Chris Kirkman) is a character that first appeared in "Emotion Lord." He returns in "Lavarinth" revealing he is Chris from 184 years in the future and went bald from lack of Vitamin B-12.

Sometime in the future, Chris became the greatest Emotion Lord of all and "reigned supreme for over a century". He also lost his hair from lack of vitamin B-12 in his youth, but this changed after Chris began taking the B-12 pills given to him by the Emotion Lord (Lavarinth). While Emotion Lords can be members of any species who have transcended the normal range of emotions, Chris will be the first human to become one. Having achieved transcendence, an Emotion Lord feels every emotion ever felt by everyone in history, every day for eternity.

The Emotion Lord is an eccentric and unpredictable supercentenarian. During the first few episodes, he is shown as just that and nothing more. As the plot thickened, however, more aspects of his personality are shown. It is clear that he cares deeply about the safety of his former team as shown in "Lavarinth" where he "sacrifices" himself for them. He is also seen crying in a later episode when he sees Beth dancing after "The Dawning of Wankershim". When Chris asks why he was crying, he responded, "I just miss her." (Ultra Wankershim) 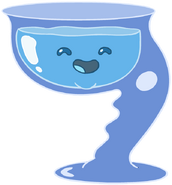