"Hamster Priest" is the fourth episode of season 2 of Bravest Warriors and the 15th episode overall.

Beth opens the trapdoor to a room where she has been keeping her father, Ralph Waldo Pickle Chips, to check up on him. Beth tells him to text her if he needs anything and that he doesn't have permission to summon his vile lord. He agrees, but after she leaves, he summons a group of hooded hamsters and activates a machine. He feeds one of them the virus-food from his back-capsule, and observes the results.

Meanwhile, a distress call comes in. Beth gets a headache but Chris suggests they take the hideout this time. While in the Control Room, Chris and Plum begin french-kissing. While Beth is confused, Danny states that it was the "billionth" time they've frenched and that Beth "had her chance with him."

As Beth is establishing contact with the Bloor ship, she notices her screen is different, but when she turns to question Danny, she is shocked to discover his eyes are now goat-eyes. Danny tells her it was the only eye type available from the dispensary. While Danny gets back to business, Beth still notices that Chris and Plum are still kissing and Wallow starts to slurp some tea.

The Bravest Warrior receive their transmission from Lord BloorBloor. BloorBloor thanks the Bravest Warriors for answering their call and notifies them that their entire kill cruisers fleet "broke." Chris doesn't believe him and Beth questions if its a trap although she still suffers another headache. BloorBloor tries to convice them it's not a trap but Danny eventually tells BloorBloor that they're not going to do it and instead exposes his buttocks and mocks him.

Danny gets interrupted by Chris, who has become bald, wearing a star-trek like uniform and acting stricter than he normally is, orders "Lieutenant Vasquez" into his Ready room. Danny follows Chris' order while bouncing on a ball, muttering how he'll "kill him for this." Beth tries to question what's going on but is interrupted by Plum, wearing a similar uniform to Chris and addressing her as "Summer Intern Tesuka."

Beth begins openly questioning why everything keeps changing. Plum tells her that Chris is acting in accordance with the Warship Protocol. Beth tries to get Wallow involved, but he's sipping from a gigantic mug of beer which he refers to as his "big 'ol beer." Danny returns, claiming he pushed Chris out the airlock for "moop violations" and Beth horrified sees Chris' frozen corpse out the window floating in space.

Suddenly, Catbug appears in the captain's chair, demanding Danny "control his lady friend" and that the bridge is "no place for a woman." Beth demands an explanation, but Catbug dismisses her as "Kitchen Wench Tesuka." Danny, now with a mustache and wearing a Hawaiian shirt then kisses Beth, saying he loves her but now wasn't the time for one of her "hysterical meltdowns."

Beth becomes even more frantic as the changes become faster, and becomes more upset over Chris' death. After another headache, she ends up on the ship with Plum as a man and Catbug as an overlord. Beth tries to fight back, but Lord Catbug demands her to be pushed out the airlock, shouting "You've failed me for the last time Pleasure Clone Tesuka!" before taking a sip from his big 'ol beer.

Beth desperately tries to escape, stating that all of this can't be real; either it has to be a dream, a holo-john illusion or an alien mind implant. However she is sucked out of the airlock and freezes in space.

As the spacecraft disappears, she notices the silhouettes of Danny, Wallow, and Plum, and asking her if she can hear them. Danny claims she’s going back into sync with them, and he noticed that Beth is returning to their dimension. When everything comes back into focus, Beth immediately hugs Chris, saying she though she lost him. Chris explains she had been bouncing around parallel dimensions. Wallow shows her the machine from the beginning of the episode, which Beth's dad had disguised as a pair of "highly-realistic" underwear to smuggle it out of the See-Through Zone, and that it may have been used to send the Warriors the monster door. While Chris tells Beth that the energy field it emits is directly linked to her brainwave patterns, Ralph finishes his experiment, with the hamster he had been feeding saying "never doubt the worm." 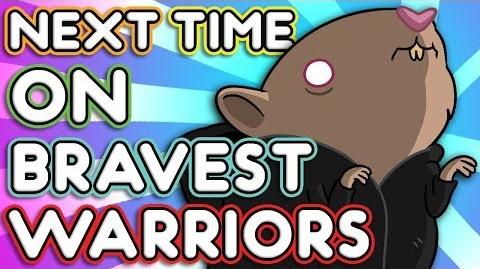 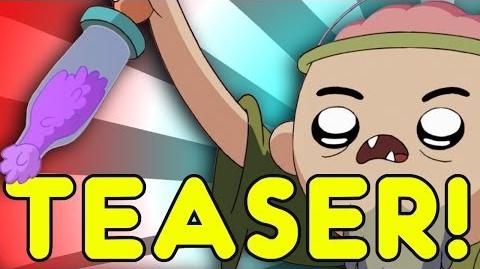 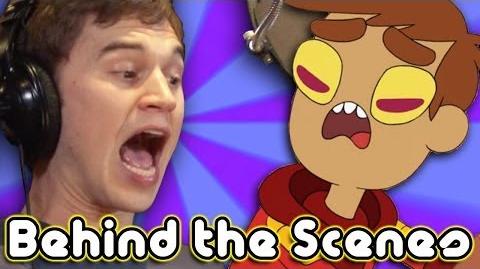 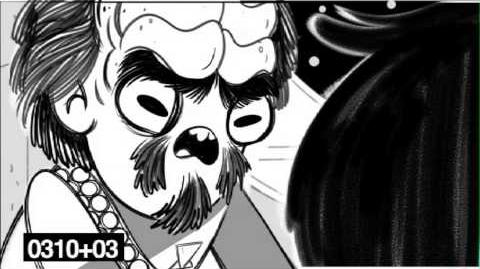 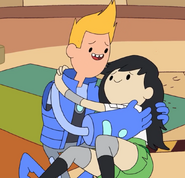