The Invisible Hideout has a large computer inside the walls which can do the Bravest Warriors commands such as locking doors by voice control. The computer can be seen when Chris gets X-Ray vision in "Gas Powered Stick".

The Invisible Hideout is mostly invisible, with the outline shown with white lines.

The Invisible Hideout is shaped like a huge robot, with only the top quarter/half showing. It has visible parts such as the multiple holes and windows, and a little wooden seagull with "spinny wings" (as described by Plum) on its right shoulder.

It is surrounded by a little lake which has a few little islands. On one of the islands is another part of the Invisible Hideout, which is the robot's hand.

In the episode "Hamster Priest", Chris told Beth they can take the hideout for a mission. When it's out of the water it resembles a ape like robot and seems to be a grey black color when the Invisible sheild is off. Although, this didn't really happened since it was all a dream created by Beth's father. 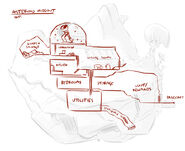