Jelly Kid is a character who first appeared in Memory Donk, sitting next to Danny Vasquez on the bus. He is of the species known as Toast-Goblins, who can create bread through a process much like a mix of photosynthesis and filter feeding. Jelly Kid seemingly cannot talk, and when Danny asked him to create some weapons to fight the Memory Donk, he created a slice of bread and jumped out the window; using it as a functioning parachute. After being rescued from the Alien Pound (how he ended up there is unrevealed) he took up residence with the Bravest Warriors until he was killed by Catbug. Despite his regenerative powers, they were hampered by the Ever Gauntlet and thus he remained dead. He was revived after having his body sent out over a lake. He then left.

Since he does not seem to communicate little is known about his personality beyond basic instincts of self preservation as seen with his bailing from a runaway bus in the episode Memory Donk, and leaving the Invisible Hideout after recovering from Catbug's mauling. He also seems to be generous or at least diplomatic by offering free food, namely the slices of fresh white bread, that he can spontaneously create.

Jelly Kid is blue and shiny. His face is light blue and he has big dark blue eyes. He has no visible internal organs or skeletal structure and has been shown to "wobble around" when moving.

Jelly-Kid is made out of Luck Slime, what the team don't realize is that it is negatively charged. When Jelly Kid's around, bad things happen.

His most distinguishing ability is being able to materialize a slice of edible freshly baked white bread by holding out one or two hands and making a "pew" sound.

Healing Factor  - Under normal circumstances Jelly Kid can recover from fatal wounds even damage as severe as decapitation. 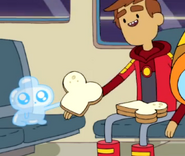 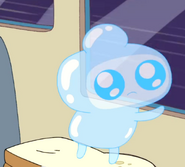 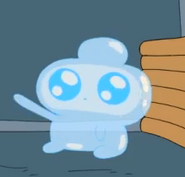