Pixel is the name of the AI in Wallow's glove. Due to an assumed software glitch, he is very possessive of Wallow, but Danny is still trying to fine tune his "nano nads" to fix this problem. Pixel is shown to have limited control of Wallow's hand in the episode "Time Slime" when Pixel tried to attack Gayle who was merely standing near Wallow. He also throws Gayle into the Fartsparkles Time Generator against Wallow's will.

The Bravest Warriors tumblr blog claim that Pixel would have a bigger role in season 2. However Pixel doesn't appear in season 2 at all, and the glove that has him was cutoff along with Wallow's arm.

Pixel is an AI in Wallow's left glove. He glows a neon blue when on, but is a darker blue when off. There is also a panel on Wallow's glow that reveals his "nano nads" which are two glowing, blue circles with circuitry in the background.

Pixel is female, being referred to as 'he' multiple times. Pixel appears to be in some sort of relationship (or post-relationship) with Wallow and is very possessive of him.

Because Wallow and Gayle had a past relationship, Pixel is more jealous than usual and even kills her at the end of the episode "Time Slime" when he finds them kissing.

He is said to be "fine tuning his nano nads", and may have possibly built Pixel.

Pixel showing that it can have some control over Wallow's arm. 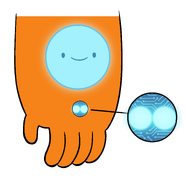