Season of the Worm

Season of the Worm is the eleventh episode and the first half of the two-part finale of season 2. It is also the 22nd episode overall.

The Bravest Warriors (without Chris) go on the hunt for Ralph Waldo Pickle Chips.

The episode opens with a message: "December 25, 3085 [Christmas Day]. The day of horror that transforms Beth forever."

The message fades to show a line of Ralph Waldo Pickle Chip's hamster priests leaving The Hideout. The Warriors: Beth, Danny, and Wallow are completely oblivious as to where the hamsters came from.

After walking back into the Hideout, the Warriors spot a hamster priest, who tells them that he "found Mitch". The camera shifts to another hamster, Mitch, who is looking in a mirror, scratching his face and screaming "Who am I?!". Mitch explains that "when [he] looked into the mirror, there was a stranger looking back at [him] from behind [his] own eyes". His rambling continues until he reveals that the hamsters were raised by Pickle Chips himself, and that they intend on summoning Aeon Worm.

Mitch also states that he is starting to doubt the worm. The first hamster priest tries to convince him to think otherwise, but Mitch begins to give into his own thoughts. Danny informs the others that Mr. Tezuka had escaped from where he was being held and the Warriors leave the Hideout to find him.

The shot is then switched to hamster Mitch, who is walking along the water pipes of the Mariner Valley. The Warriors follow him from above on a falcon wingsuit. Wallow detects an unknown second life sign inside hamster Mitch but it quickly disappears. Their position is revealed when Wallow laughs at Danny's fart. Danny attempts to prevent the suit from crashing but is unsuccessful, as the three crash into an abandoned terraforming colony. The colony is filled with strange plants, and the Warriors discover that it is a huge Dimension Garden, similar to the one Beth's father had by the Hideout, with plants from other dimensions.

Wallow's glove is covered in a strange goo that he picked up from a plant when they entered the colony. Beth scans it to find that the goo is actually millions of microscopic " Interdimensional Humping Gnats" that will slowly transport Wallow to another dimension if not removed. He begins to fade as Beth says she "has no other choice". Taking out her holo-cutlass, Beth swings at Wallow. Danny and Beth are then shown using a welding torch-like device on Wallow, assumably to cauterize the wound. Beth then throws a torch into the bushes, setting fire to the colony.

The final scene commences when the three are shown standing atop a cliff (with Wallow missing his left arm) as purple fire rages behind them. 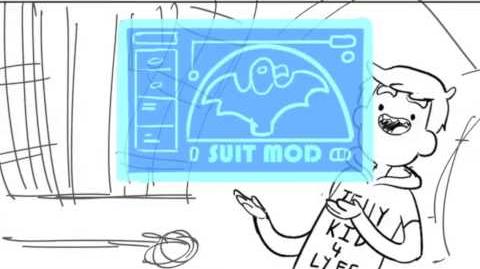 Season of the Worm Animatic - Season 2 Ep. 11 of Bravest Warriors on CartoonHangover2
Animatic