Supreme Chancellor Gayle, also known as Gayle the Glendalien, is a character who was in the series premiere, "Time Slime". She made an emergency call to speak with the Courageous Battlers, so that they could help solve the crisis over at the Glendale Time Station on the moon of Glendale. However, Beth Tezuka reveals to her, that their parents' old team, the Courageous Battlers, had disappeared two years ago, but Chris Kirkman ensures Gayle that any job their parents could do, the Bravest Warriors team could do as well. Wallow had a past relationship with her, and they still have feelings for each other. 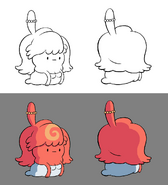 She can be seen at the top right.