Wallow is one of the main characters of the web series Bravest Warriors and is one of the four members of the team. He is caring and fun-loving, with a big heart. He is voiced by Ian Jones-Quartey.

Wallow is an easy-going, offbeat teenager with an unusually flippant sense of humor. He likes making friends with adorable creatures on extraterrestrial planets and bringing them home. Although Wallow is big and strong on the outside, he is very sweet and loving to creatures and people.

He considers aliens as equals and shares his room with a number of roommates (including Catbug and Impossibear). As a xenosexual, he also only dates aliens and doesn't ever think of humans in a romantic way.

Wallow is a tall, bald, and husky Samoan with brown eyes. He wears an orange shirt and boots, and black pants. He also wears his orange spacesuit gloves and torso protection. As of Season of the Worm Wallow's arm is missing and is replaced with a jelly replica.

Wallow is in love with Gayle. Wallow had a past romantic relationship with her, but in "Time Slime" she mostly bottled up her feelings about it, until Wallow and her shared a passionate kiss. They still love each other, even though she bottles up her emotions.

After the episode, they have not been seen together and the current nature of their relationship is unknown.

Pixel is the A.I. who lives in Wallow's left glove. He is possessive of Wallow and hates it when other people try to get close to Wallow and develop a relationship with him.

Wallow and Beth are friends. They are teammates when doing missions and friends when hanging out. There is nothing more to this. In Season of the Worm, Beth cuts off Wallow's arm in order to stop bizarre microorganisms from humping his arm into another dimension. This was foreshadowed by Chris' vision.

These two guys are best friends. They often both laugh at each other's jokes. Danny and Wallow both care for the team. Wallow was extremely upset when in the episode "Emotion Lord" episode when Danny was close to the brink of death. Danny may be Wallow's best friend but they also sometimes have small rivalries or competitions such as in the episode "Gas-Powered Stick" when Wallow put Danny in a headlock while trying to impress Plum. Another time, both were competing on whether Danny or Wallow could make a smaller splash.

In the pilot episode, Wallow doesn't like being bossed around by Chris. Especially because he sees Chris as the "big emotional sister he never had". In the series, however, His personality changed and he became close friends with Chris and doesn't mind being led. Despite liking to poke fun on Chris for his crush on Beth, like Danny, he approves of them being together.

Wallow is attracted to Plum. He and Danny compete for her attention, although Danny seems to be the most desperate. 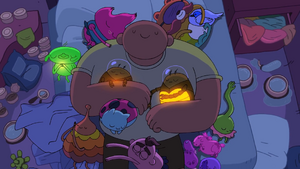 Wallow likes to keep many animal/alien companions around the house. He is shown to love them all very much (and they love him) and takes care of them. His pets include:

To see more, go to Wallow/Gallery 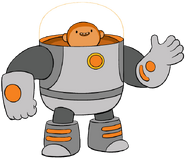 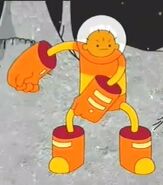 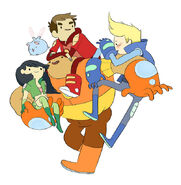